An interview with JoAnn Kowtko, an early Faith Christian School alumni and current Alumni Relations Coordinator. JoAnn tells of curve-ruiners, teachers who welcomed the tough questions and impacted her life, preparation for college, her greatest surprise, and her Big Message(s). 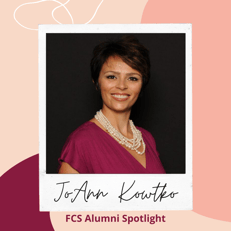 Cathy: JoAnn, you were one of the early FCS students, back when FCS was meeting at the church across from Grandin Theater (which was news to me). Tell me about those early days.

Joann: Yes, I think they were in their second year and just had 6-12th grade available. I joined FCS in 10th grade. I received the Geo-Politics Award, which I’m quite proud of. David Wells was the Valedictorian the year I graduated and quite the curve-ruiner, let me tell you!

I have fond memories of our class trip to Wallops Island where I ate a live fish, trying to impress a boy—it didn’t work!

Cathy: The things we do to impress boys. I ate a live grasshopper once to impress some boys.

JoAnn: Exactly. That was the first overnight trip. So much biology and fun, hopping around in bogs. And everyone got along. There were only seven of us in that grade, so it was a really small and intimate class. No real shenanigans to report.

I really loved the first headmaster, Chuck Evans. I didn't realize at the time how young he was!  The school needed a Latin teacher so he was teaching Latin at FCS as he learned from Hollins. I recall a very dry sense of humor. I still remember the first day of his apologetics class and covering prominent world-views—very useful. I still have the class notes in my Bible! He had a way of making challenging subjects fun.

I also remember Ms. Batchelder—she too was young and was just out of college. Also had a dry sense of humor. She taught Geo Politics and was really the hardest teacher I had at FCS, but she was so witty—she was the kind of teacher I wanted to work hard for.

Cathy: And you got the award for that subject.

JoAnn: Yes! I also remember Mrs. Reed, who taught all the sciences. She was one of the few people I knew before going to FCS because we went to the same church. She really made science enjoyable and made the most of the small resources FCS had, such as taking advantage of the traveling tech lab at Virginia Tech.

I recall the Senior Gala—it's a big presentation from the senior class. We roasted the teachers with a song to the tune of "American Pie" and then each teacher read a message to each of the seniors. I still have the message Mrs. Reed read to me. I was so impacted by my time at FCS. It was encouraging and empowering. I felt known, which to me, was priceless.

Cathy: Where did you attend prior to FCS?

JoAnn: I came from a local private school, where I had been branded as a bit “combative” in religion class because I was always asking questions to dig deeper. However, at FCS, I felt my faith blossom and my confidence soar because the teachers here wanted those hard questions! I believe FCS does a great job of teaching students not WHAT to think, but HOW to think. It really helped me focus as a teenager on the important things, which was preparation for college and the challenge to our faith that college presents. Without the training I received at FCS, I would have had a Sunday-Christian depth of faith and no real understanding of why it makes sense to be a Christian—and certainly would have been unable to answer the questions that arose in college!

Cathy: Tell me more about the differences between the two schools and how you navigated them. I think this is important for parents who are considering switching from any other school to FCS and it might help the transition go more smoothly.

JoAnn: Well, I probably shouldn’t have written my first paper for Mrs. Knight (who is still teaching at FCS, by the way) by hand. I definitely should’ve typed it. I assumed the required paper was going to be like my previous papers at Roanoke Catholic, 1-2 pages. Ha! It ended up being pages and pages! Roanoke Catholic didn’t require papers on the computer at the time. I was used to basically “phoning it in” and getting A and B’s at Roanoke Catholic. I had no idea of the different academic level that would be required. But it prepared me for college! Really, I was prepared for GRAD school! My college class syllabi were kind of laughable—college homework was a breeze.

Cathy: Where did you end up going to college?

JoAnn: I went to Roanoke College, majoring in Psychology. I had almost a full academic scholarship and comped out of several classes in college. Then I completed an internship at the Commonwealth’s Attorney’s office. I was strongly considering a prosecution career—I had even taken out the $140K loan—but then gave it back when I realized I didn’t want to be 80 when I finally paid it off!

Cathy: I’ll concur with that wise move. What did you do instead?

JoAnn: My parents were in sales, so I went into Pharmaceutical Sales in the DC area. I did that from 2007-2015. I quit when I was five-months pregnant, moved back to Roanoke, and decided to be at home because my hubby does a lot of traveling as the National Federal Sales Director for a Fortune 500 Company. Now, I’m working part-time for FCS as the Alumni Relations Coordinator, which is a fancy title for “I’ll be contacting you.”

Cathy: What do you love about being our Alumni Relations Coordinator?

JoAnn: I love planning the alumni weekends and getting people back together, face-to-face. Fellowship is impactful, meaningful. I’ll be glad when COVID-19 lets up.

Cathy: And you have two children…

JoAnn: Yes! I have a daughter who is five, starting Kindergarten at FCS, and a 1-year-old boy.

Cathy: What’s your approach to life, in a nutshell?

JoAnn: I think like most Christians, I try to live my life through the lens of Christ as best as we can, obviously falling short, but as long as we keep Him at the center of our profession, family, churches, and community, it keeps our focus on where it needs to be.

Cathy: Out of all you did and do now, what has surprised you the most?

JoAnn: Motherhood. I was surprised at how fulfilling my children would be. How amazing the family unit is designed to be.

Cathy: We all have a message. What’s your “big message”?

JoAnn: My big message is probably unoriginal, but very classical: This world would be a much better place if we kept Christ's commandment to "love one another."  We have become so balkanized, we forget to treat all others with kindness and compassion. Also, Generation Z, please reconsider skinny jeans.

Cathy: (Laughing) Both messages are probably pretty “classical” in nature!

Nature Studies: More Than Playing In The Dirt

If you've wondered about the Nature Studies program at Faith Christian School, and how it fits into...

Dolph Painter's Charge To The Senior Class of 2021

Below, we've made available the W.A.T.C.H. points from Dolph Painter's charge to Faith Christian...